1: What is COB led down light advantage: 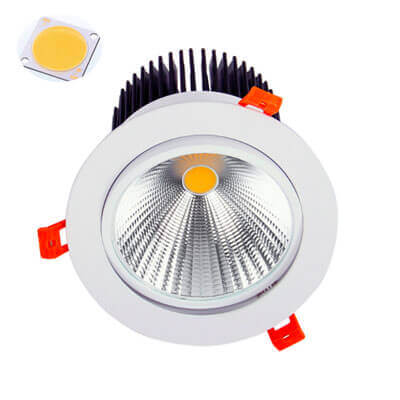 – Produce  a narrower, more focused beam than SMD, throwing the light onto the object more effectively

– Can achieve higher light levels on the surface

– Produces halogen-style light, which is a definite plus

Due to their narrower beam angle and ability to THROW light more effectively, COB LEDs are better suited to installations above kitchen benches, dining tables, offices and study rooms. They are also far more effective than SMDs when used in gimbal (adjustable) applications, where the angle of the downlight is focused toward an object (such as a picture or painting).

2: What is SMD led downlight advantage:

– Produce a wider beam than COB

– Offers a more slimline, uniform look due to frosted covers- you don’t see the inner components

Due to their wide beam angle, SMD LEDs are better suited to more open areas such as living rooms, bedrooms, kitchens, laundries, where minimal shadowing is needed.

That all depends on your application. If you’re looking for color changeable interior and/or exterior accent lighting, you’ll need to go with SMD LEDs; if you want the maximum lumens per Watt for a mono-colored light (such as a fog light, headlight or dome light) you might want to check out what’s available in COB LEDs.

How to choose the right beam angle for your LED Downlights ?
September 26, 2022

All information about Magnetic lighting system
September 18, 2021
Go to Top